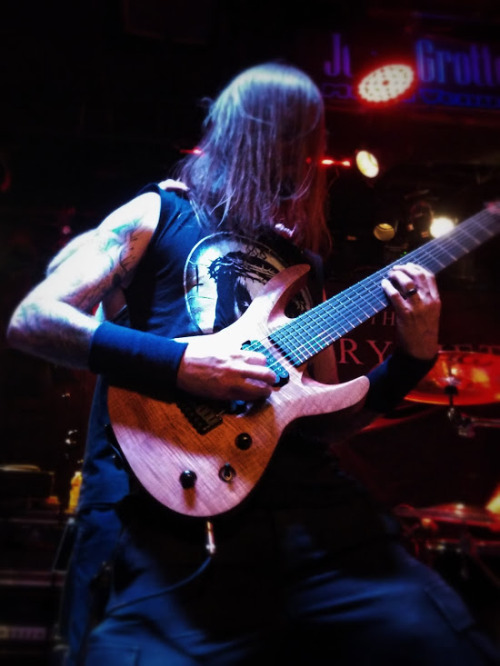 If you're a Quo Vadis fan, than you'd undoubtedly desire this compilation for both the newer material and the chance to own the remainder of the original demo. I probably stand alone in believing that the band might have had more potential if they had persisted in the more punishing sound of the demo, but I found it refreshing regardless, at least for those three songs. Really there is only one new track, "At One", and it's consistent with Day Into Night, but maybe not enough to throw your money at if you've already got a demo.

In addition, this is one of those enhanced multimedia discs which includes the video for "Dysgenics", which is a simple black and white shot of the band performing the song.

It's not very exciting, but then, few videos are. In the end, other bands have done far more wrong by their fans than this. There are plenty of catchy riffs and groovy hooks that I find myself humming them at random times. The drums are probably the Mach An - Falkenberg - Kain element on the whole album.

Yanic Bercier contributes some solid drumming to the mix, with a healthy amount of diversity on each track. It can be loud More - Cliff Portwood - By Request Heres Cliff Portwood aggressive, then he will suddenly change to a slower pace and then maybe back again. They can be pounding and blasting at you one minute, and more subdued the next, allowing for Mute Requiem - Quo Vadis - Day Into Night guitar melodies to caress the sound waves.

Mute Requiem - Quo Vadis - Day Into Night on this release is crisp and every instrument is perfectly audible to the befitting degree. This clarity adds a definite eloquence to proceedings, which continues the flowing nature of the album as a whole.

On the whole, this is a very nutritious dose of melodic death metal with plenty of technicality to keep listeners of all preferences interested. I don't consider this too melodic to discourage fans of the heavier side of death metal, in the same way that is isn't too heavy to put off those who prefer a more melodic approach.

Day Into Night has the appropriate balance of all characteristics, with enough of each to have most audiences giving this repeat spins. Damn, this album has so much to offer.

I find myself listening to this and wondering, is there anything bad about this album? Well I found a few small flaws, but other than that, this album is nearly perfect.

It has some melo-death, some thrash, some death, and some technical. Take all that, put it in a blender and you got Day Into Night. It always stays very melodic, and always agressive. That's something very few bands can accomplish - mixing melodic with brutal see Intestine Baalism. Not only does this album contain all of the above, but it also has relaxing clean guitar breaks.

A bit too much of brutal tecnical riffing gets boring after a while, so the band adds some variety by putting in some leads in Mute Requiem - Quo Vadis - Day Into Night end a few songs. Drums are very varied, it's not always the same boring beat; it has many drum fills. Now for the few flaws: This album needs: A: More acoustic interludes.

Clean guitarinterludes are nice, but nothing can beat an acoustic. B: Make the relaxing clean guitar parts a bit shorter. Some songs became repetitive near the end. C: "Night of the Roses" Sade - Lovers Live simply amazing, but it's way too short It has a great idea, but as soon as I started thinking "Hey, this one Mute Requiem - Quo Vadis - Day Into Nightthe song was already over.

It could easily serve as an acoustic interlude in one of the longer songs. A must-have for any fan of this band, or this genre. Starts of excellently, truly tight and fast thrash. All the major elements needed for top quality thrash basically. Musically, keeps this up all the way through, with nice harmonies here and there. Shut up. Musically, this LP has its impressive parts all throughout, but, I got near the end of track 4, "Hunter-Killer Endgame ", and was very disappointed by the weak Mute Requiem - Quo Vadis - Day Into Nightguitarist totally holding back, trying to produce a solo of "beauty" and failing rather than an intense, technical and intelligent solo.

All the solos throughout are basic failures too. Another thing I really do not like about the LP, is the weak vocals. No, the very weak vocals. These vocals would not even be considered good for 80's vocals as many faggots can't get into 80's vocal style.

They sound like a midget with a very small oesophagus is trying in all his utter desperation to growl. The song "Dream", is pretty much your stereotypical melodic instrumental, makes no real sense and has no real point of being on the LP at all.

One or two ok parts to it, but like I say all the time, one or two good parts to a song do not necessarily save the song. I think track 7, "On The Shores Of Ithaka" has to be one of my favourites for the great riff in on around a minute and a half, and half way in the song too. The solo, funnily isn't too bad, but nothing great. Nah, the more you listen to this LP, the more it looses it's value and becomes weaker.

Oddly it sooths meQuiets my needs New answers rush at me. With hateful vengeance, I throw my soul away, Conclusions might as well Be carved out in stone, In a flash of clarity From exiled sanity- My mute witness and detested consort With singularity of my purpose It quiets my mind!!!

Sinful ecstasy feeds my skin!!!! As I throw my soul away!!! Twisted logic of foul play. Here I stand of sound body and foul mind Composing my manifesto of silence.

A twisted requiem by the mute for the deaf. A lunatics symphony of absonance Discordant cadences of a chaotic mind. It quiets my mind! As I throw my soul away! I threaten the universe with murder and rape In Warmer Days (Universal Solution Remix) - Various - Balearic Sunset Vibes, Vol.

3 of obtaining some sort of reaction.

Posted at 25.02.2020 Reply
quo vadis album day into night is a great one. the guitar and drum work is awesome but the vocals could be better. this album was released in and is GREAT! most metal bands now-a-days have no talent. not with quo vadis in day into night. the guitar playing is probably the most noticable part in 4/5.